Migrating away from Cake as my blog build tool

I have been using Wyam as my blog engine for almost two years. As part of using Wyam, I have been using the awesome Cake.Wyam addin for building my blog. I have paired that along with a few other Cake addins to create a Cake build script that orchestrates my builds. With Wyam 2.0 being released and the .NET Core global tool now existing I have decided that I am going to move to a much simpler build script. This post is going to serve as the guide to how I migrated away.

In Cake, I use the following addins:

As you can see, the biggest advantage to Cake was for the Wyam support and since I was already using Cake, I decided to go ahead and just use it for everything.

I have stated previously that .NET global tools would make it possible to migrate away from Cake so today is the day that I do it. The first step is going to be to remove the following files from my project and source control. 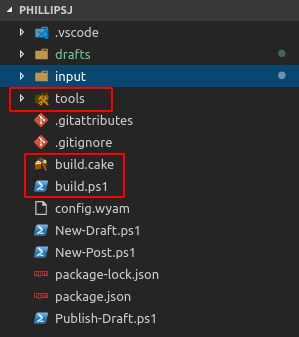 Since I am using the Netlify CLI tool, I am just going to make my entire build process an NPM script. I am going to open up my package.json and add the following:

I am just hooking into the NPM standard scripts. I install the global .NET Core tool automatically after I execute NPM install helps since you only have to run one command. I have configured a plain build command, then I leveraged the start default command to execute the preview with a watch. Finally, I created a predeploy and deploy scripts to wire up running the build then deploying to Netlify. With all of this complete, here is me running Wyam using the NPM scripts.

Works like a charm, I just need to modify my AppVeyor build to execute my npm publish command and I am in business.

Thanks for reading along and I hope you find this useful.