Cake Crumbs of the Week #3

This is the third edition of my weekly series. Here are a few more tips.

How to pin your Cake version

The bootstrapper for Cake will always download the latest and greatest version of Cake. Sometimes this is the behavior that you want and other times it isn’t. The general recommendation by the Cake team is to always pin your version in the pacakges.config file located in the tools directory. This can be found here in the project documentation. 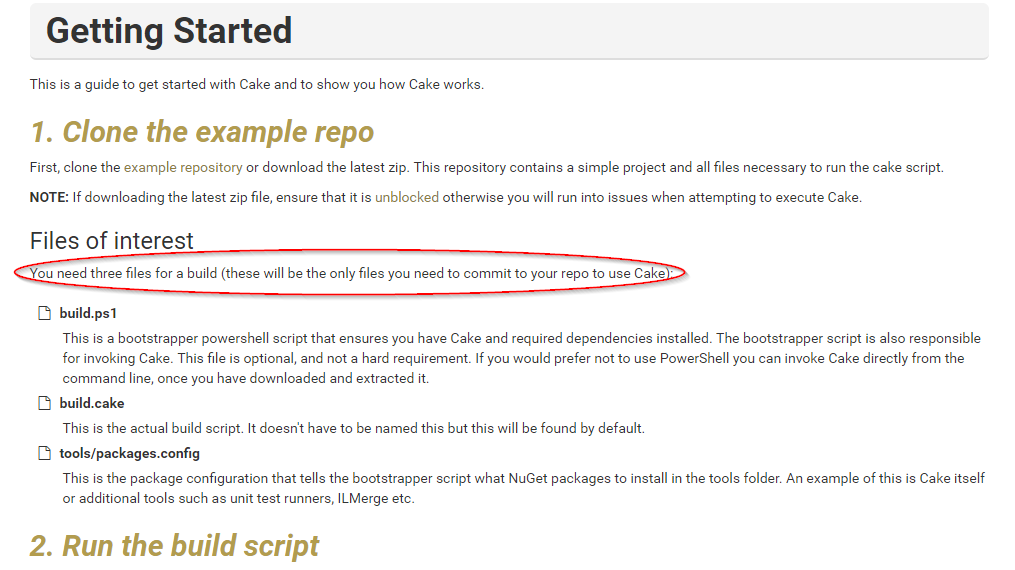 However, if you are like most people, your .gitignore file has the following lines:

If notice that last line, it will ignore everything in the tools directory. If you noticed in the documentation above you want to ignore everything in that folder except for the packages.config. To do that you have to do a little gitignore tomfoolery. You will need to change your gitignore to ignore all files under that directory except for your packages.config. How exactly that is achieved is below.

With that in your gitignore file, your Cake version will be pinned for your project. Then when you are ready to upgrade you can change the version number in the packages.config or you can delete it and run the bootstrapper.

Baking a build with a Recipe

Did you know that if you are not a glutton for punishment and your build needs are pretty normal you can use this best kept secret in the Cake-Contrib organization called Cake.Recipe. Gary Park has been operating a covert mission, in the open, to make configuring a Cake build really easy. All you need to do is to load the Cake.Recipe NuGet package in a file called setup.cake. That name is purely convention so feel free to alter it. Once that is in place you will need to update the bootstrapper to execute setup.cake. Then just set your environment variables you want to use, using the conventions defined here. Once that is complete you can do a basic build parameters configuration, adjust some tool settings you need and BAM! You have a build that compiles and discovers your tests to be executed without you having to define everything. Lots of other cool items in there that I will be blogging about shortly.

Here is an example from the Cake.CsvHelper project, but the Cake-Contrib organization is full of examples too:

You have a really awesome build that even prints ASCII art.

** A reminder that this is still prerelease. **